Each year, RSU Student Union (RSU SP) hosts the annual award “Zelta Pakavs”, which focuses on particular events, organisations and people, who, from the previous year's ceremony to “Zelta Pakavs 2020”, have focused most on topical issues, have contributed to the benefit of students, have created innovative ideas and have been an example for others.

We call for candidates to be nominated for each nomination, thus assessing the contribution made to the RSU SP.

Due to the COVID-19 pandemic and the state of emergency announced in the country, the annual ceremony is scheduled for October 9th instead of April, when the RSU SP traditionally celebrates their birthday. We apologise for any inconvenience and we will continue to report current information! 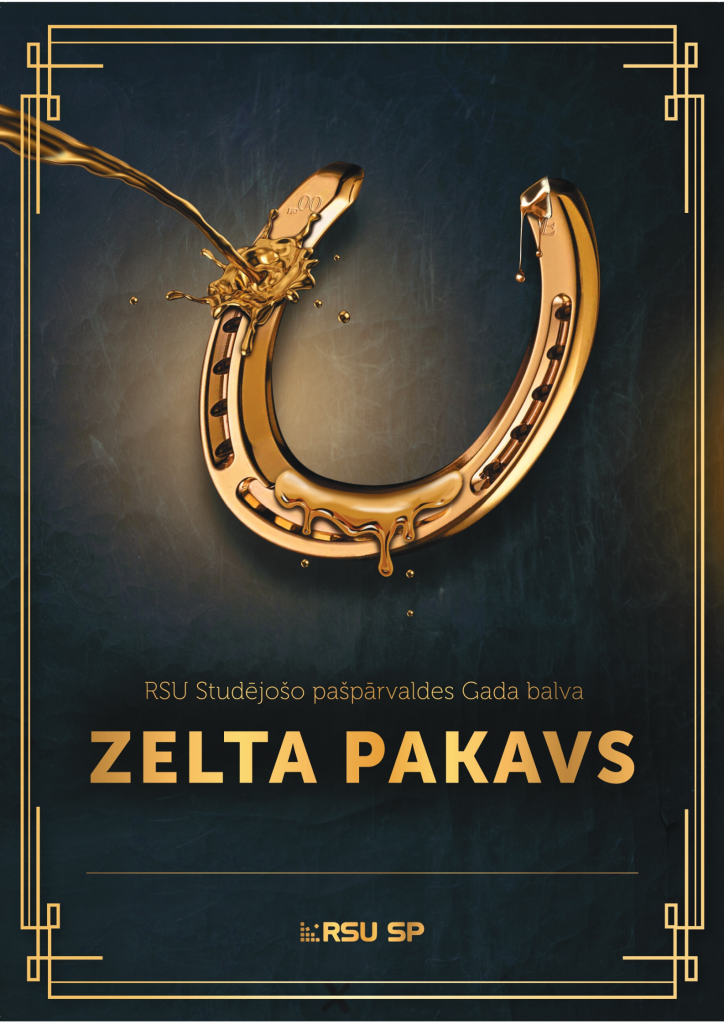 Before nominating the candidates, we would like to introduce a description of the nominations:

Gada pakavs (Horseshoe of the year)

The winner of this nomination may be any activity, event or project that has had a positive impact on RSU students, has contributed to the recognition of the RSU SP, educating students and/or raising the competence of student representatives. When nominating this award, do not forget some important points: this project, event or activity has benefited RSU students and has created a positive image of RSU SP.

Gada iedvesma (Inspiration of the year)

The RSU SU is engaged by active and motivated students who want to improve the quality of studies at university and in the country as a whole. At times, however, motivation begins to disappear, and then a person or event is needed that will inspire continued action and encourage new objectives to be achieved. Nomination of the year's inspiration rewards the student, university employee or event that has helped to move forward and has given a new motivational dose to continue the journey in RSU.

Gada izaugsme (Growth of the year)

The year's growth is awarded to the member of the RSU SP who, during the year, has developed his or her skills in cultural, academic or other fields and exercised his potential, which resulted in positive benefits for RSU students. The nominant must be an active SP member throughout the year, participating in Student Union projects and activities, or representing RSU and/or RSU SP in bigger scale events.

Gada Vecbiedrs (Ex-member of the board of the year)

The RSU SP could not be conceived without grand members who continue to engage in the activities of the organisation and share experience. Constructive criticism and useful advice help to maintain the organisation's activity at a high level, and that is exactly what every vecbiedrs has to do. The award for this nomination shall be awarded to the member who, during the year, has contributed most to the development of the RSU SU, both by supporting other members of the organisation and by actively engaging in the activities of the self-government and by introducing positive changes.

Gada draugs (Friend of the year)

Nomination Friend of the year is an opportunity to say “thank you” to a person, another Student Union, organisation or RSU unit who has supported and/or positively influenced the image and functioning of RSU SU. A friend of the year is what helped and was responsive to RSU SU when involved in issues, projects, but it is not a member of RSU SU.

Gada atbalstītājs (Supporter of the year)

It would be impossible to implement anything in RSu SU without any supporters. Supporters are legal or physical individuals who have helped materially in projects organized by RSU SU this year to create a pleasant atmosphere for participants throughout the event. The award may include legal or physical person which has supported several projects organised by RSU SU and is always open to cooperation with our organisation.

Gada ķeza (Mess of the year)

Taking responsibility for organising an event or engaging in academic, social or otherwise relevant issues does not always work out as intended. Some problems are easy to solve, while others require additional energy resources and do not have positive consequences. The annual mess is exactly the award where a situation or event has negatively affected RSU SU, students or higher education issues. Despite being negative, getting an award is also enjoyable.

Science societies complement students' knowledge in 27 medical fields and provide an opportunity for students to develop learning content. This nomination is rewarded to the science society that has made a significant contribution to scientific activity during the period indicated - the most scientific research in relation to the number of members of the group, improvements to the activities of the group, additional activities organised and involvement in projects outside the meetings.

Gada aktīvists (Activist of the year)

A successfully organized event can't be made without young people who are willing to take action. The activist is an RSU student who has been most involved in the life of the Student Union during the year, helped in the everyday work of the Board, participated in solving issues important to students and helped organizing events. The award can be presented to any RSU student who is not a member of the Board.

Gada inovācija (Innovation of the year)

Change keeps us going forward! Reflecting at this year's events, which have made us all adapt to a different reality, RSU SP is introducing a new nomination - innovation of the year! Any infrastructure, study, non-study or research-related innovative development, improvement or project for students in academic, social, cultural or other fields may be nominated.